CNN OP-ED: “Cancer patients like me face a dystopian nightmare amid the virus”

Editor’s Note: Sheetal Sheth is an award-winning actress, producer, children’s book author and activist. She is on the advisory board of Equality Now and an ambassador for The Representation Project. The views expressed here are hers. Read more opinion on CNN.

(CNN)Having cancer is harrowing — having it in midst of a pandemic is even worse.

I’m one of the lucky ones. My prognosis is good. It has been over 15 months since my breast cancer diagnosis. I have had a double mastectomy, breast reconstruction and a year of further treatment, which included 12 rounds of chemotherapy. 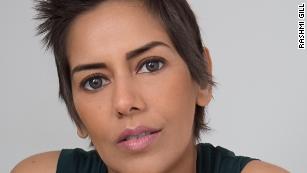 I was just about to have my final treatment — just about to put one of the worst years of my life behind me — when the coronavirus pandemic hit and our everyday reality became a dystopian nightmare.
The weeks leading up to my final infusion were fraught with a cycle of unanswered phone calls to my doctor’s office (they kept telling me to call back as they were so overwhelmed), worst-case scenarios playing out in my head and a barrage of well-intentioned friends and family giving out unsolicited advice (as if I hadn’t stayed up nights thinking through every possible scenario already). When you have cancer, insomnia and “what if’s” are part of your new normal.
In the search for answers, my husband even emailed one of the researchers whose work helped doctors design my treatment protocol to ask a simple question: should I stay home or should I go? She didn’t know either.
Skipping or delaying the treatment wasn’t advisable and neither was going to the clinic and risking possible exposure to Covid-19 — especially in New York City, where I live. In the end, my doctor said, it was up to me. So I had to decide, which was worse: cancer or the coronavirus?
To make things worse, it was chilling to turn on the news and learn that since I have (or had) cancer (not sure what tense to use at this point since my follow-up appointments have all been postponed indefinitely), my life is considered harder to save in ways that could impact the resources allocated to my treatment. It’s hard not to feel that therefore according to some measures, my life is less valuable than others if I get Covid-19.
I realize that the need for triage is real. So many hospitals are facing a hellish nightmare — a lack of resources, a rising body count, suffering on a massive scale. When we look back to assess the ravages this disease has visited upon us, the toll must surely account for the cost of the staggering logic our society has been forced to employ.
I chose to risk it and go in for treatment. A fellow cancer warrior told me at the beginning of my journey, “When it comes to cancer, the best we can do is to make decisions that will bring us the most peace of mind.” If my cancer was to reoccur, I knew I’d always wonder about that skipped treatment.
As I watched the IV drip bring life-saving drugs to my body for hopefully the last time, I wondered if there were particles of Covid floating through the halls waiting to infect us. Easy targets. Then I realized how quiet it was. Except for the disturbing sound of one ambulance after another wailing nearby, it was silent.
But far from peaceful.
I flashed back to the day of my biopsies. It was December 21, 2018, and my day had gone from having a “suspicious” mammogram at 7:30 a.m. to “must have biopsies” that same afternoon. It progressed so fast, I couldn’t even comprehend what was happening. The doctors were concise and clear about how they wanted to proceed to help save my life.
I thought about the other patients, now alone like me, getting treatment in cubicles next to mine. I wondered how they got here. I thought about the toll this implacable stress of the pandemic was having on their already immunocompromised bodies. I wondered whose treatments have been irrevocably compromised by the efforts to fight Covid-19.
Many of us were initially told our care plan was “urgent” but in light of Covid, we have now had some part of that “critical” protocol either postponed or canceled as “unnecessary risks.” Moreover, there are thousands of people who will go undiagnosed early enough to beat their cancers. Most screenings and general care appointments have been determined “nonessential,” but that early detection saves lives. People are sick and they don’t even know it.
I hear the stark difference in conversations with my medical team from when I was first diagnosed to now. The clarity has been replaced with uncertainty. The doctors are as frustrated as we are. They are having to make do with limited resources and ever-changing protocols. Patients are looking for that life raft, that answer that will bring comfort. But it doesn’t exist.
Every decision comes at a cost. One that we have to be willing to pay.
When I walked out of the cancer clinic, I saw an elderly woman riding in on a toddler’s scooter. She had a mask on that she kept stopping to adjust and was cruising at a pace that was barely faster than a walk. At first I smiled: I imagined a scenario where her grandchild had insisted she take their scooter to get to her appointment and sent her off with giggles.
But then I was overwhelmed with rage. I was angry for the risk she had to take. I was angry that she had to fight cancer all by herself. I was angry that so much of this never had to happen. I was angry that we may never find peace again. I was angry that all the systems in place around her — the very ones to save and protect her — can’t help her right now.
I was angry because I didn’t know if this woman was more likely to die from cancer or from the failures of our government to act more decisively early on to try to contain the spread of the virus.
Being diagnosed with cancer is shattering. It rips you raw.
But I’ve never been angrier.
And as someone who also has to live with the cost of this epidemic in your own way, you should be too.