ABCD is the story of Raj (Faran Tahir) and Nina (Sheetal Sheth), first generation immigrant children who have grown up in America, and their mother, Anju (Madhur Jaffrey), who is desperately trying in her old age to reconcile her long ago decision to come to America. ABCD revolves around characters who are culturally lost, since they can no longer fully adhere to the customs of the country they have left behind, yet they know they cannot belong to mainstream American culture.

In the end, fate forces Raj and Nina to make their decisions. And the paths they choose not only change their lives forever, but have startling consequences for all around them. 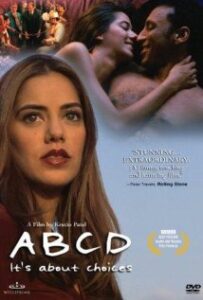