A suspenseful, psychological drama with elements of fantasy and the supernatural, Go North is a short film centered around a young woman who begins to lose her sanity while escaping the World Trade Center on 9/11.

Frightened and in shock, Riya descends the stairs of the World Trade Center’s north tower on 9/11. She and her good friend Miriam stay together, moving at a quick pace. Suddenly, as if in a dream, Riya finds herself transported to her parents’ house – it’s days later, and she survived the attacks. As Riya reflects on the enormity of the trauma and tries to get her bearings, she comes face-to-face with the ghost of Miriam, who did not survive the attacks. Suddenly Riya is transported back to the stairwell in the World Trade Center, with Miriam by her side, alive and well.

As Riya shifts between these two separate realities, she questions her own sanity and desperately tries to comprehend how she survived the attacks while Miriam perished, despite being inseparable in the stairwell. 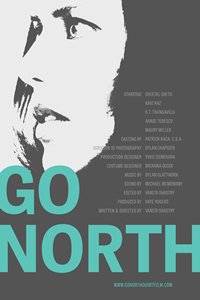