This books shines with inspiration and joyful illustrations.
Anjali is very good at playing the tabla and enjoys it, too, but when a boy at school begins to bug her about being able to play better than he can, she decides it might make things easier for her to act as if she can’t really play that well. That seems to work okay until the teacher announces an upcoming contest. Anjali would really like to give her best and win, but the harder she tries, the more the other kids bug her. Finally, she decides there’s only one thing left for her to do.
First off, I really enjoyed the illustrations. Not only do they bring Anjali, the other kids and her family across nicely, but there are scenes, which allow fantasy to also flow in. It gives the entire thing a fun atmosphere and keeps the important message still light.
The author addresses a situation which kids can relate to, while also adding a bit of cultural information and flair. The two slide together seamlessly together, and that while also creating a tale and a character young readers can enjoy. The text is simple enough from the vocabulary end of things but is a little longer, making it not for the youngest reader. It’s just right for the intended age group, however, and also works well as a read-aloud.
The message is inspiring and encourages kids not to bend to those, who don’t try to support them. It’s definitely a tale which leaves the reader rooting for Anjali and smiling when she succeeds. 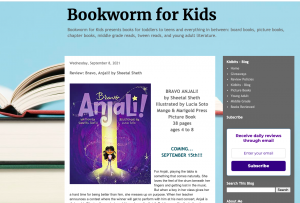