Pronouncing Kids’ Names Correctly Matters. Here’s How to Get it Right.

Gail Cornwell wrote this insightful article about the importance of pronouncing kids’ names correctly and highlighted the article with authors covering the topic. Here is an excerpt on Sheetal Sheth:

Sheetal Sheth has been an actor since the 1990s, “before brown was cool,” she says. “I cannot tell you how many people suggested or highly recommended that I change my name.” Sheth, who is Indian American, watched it happen to other aspiring actors of color and Jewish ones as well. Sheth kept her name and believes she lost out on roles as a result.

When she went to a bookstore to start building her first baby’s library, she realized, “Oh my god. These are the same books I had when I was growing up.” The handful of newer ones that offered more representation “felt very tokenized,” she says. “It ends up being like, I’ve got the Diwali book, I’ve got the Eid book, I’ve got the Lunar New Year book.”

That prompted her to write Always Anjali, the tale of a seven-year-old who plays instruments and sports, has dinner with her parents, and goes to school. Protagonist Anjali can’t spot her name amid a souvenir license plate display, and when a classmate sings a mocking song about her name, she contemplates changing it.

Publishing has changed a bit since Sheth was shopping Always Anjali, released in 2018. But some of the notes she got back from editors on her pitch “[were] either whitewashing the story, or they would say, ‘Well, this doesn’t feel Indian enough.’”

Sheth says she wanted to produce a slice-of-life story where “culture isn’t the narrative.” She wondered, “Why can’t you do a story about kids, and the family just happens to be Indian? The dominant white culture gets to do that.”

Now, when she reads Always Anjali at schools, Sheth asks students to raise their hand if they’ve ever had someone mispronounce their name, misspell their name, or give them a nickname they don’t like.

Almost all hands go up. “It’s universal,” she says.

At the same time, the children who take time to approach her afterward and share that their teachers and friends mispronounce their name are often kids of color. “It shouldn’t be on them” to correct and guide teachers, Sheth says. But at the same time, they have to be equipped to deal with the world they live in. “You get to the point where you [feel like you] can’t correct it anymore,” Sheth says, but she encourages kids not to give up. She’ll tell them, “You can, absolutely. Let’s do it right now.”

Sheth is walking a line familiar to those who think deeply about this issue: how to support children in standing up for their names without placing on them the burden to address the bias behind others’ unwillingness to try mastering certain names.

You can read the full article here. 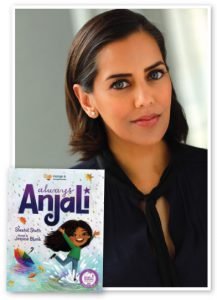